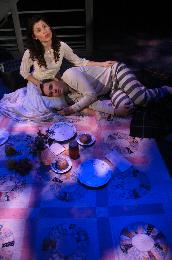 The first thing one noticed upon entering the auditorium of St. Paul’s History Theatre during the run of the musical Parade was the expansive, imposing set designed by Kate Sutton-Johnson. Its main purpose was to serve as a courtroom near the end of Act One but its stockade-like intricacies served multiple purposes throughout the show. The thick wall of fog that hung about the stage was a showcase for Paul Hackenmueller’s evocative lighting design, and the vision of a single noose hanging above the stage spoke of the tragedy to come. Before the show even started the stage had set the perfect tone for this production, a joint venture between the Minnesota Jewish Theatre Company and Theater Latte Da.

I have attended and thoroughly enjoyed two of Theater Latte Da’s past musical outings, Floyd Collins and Gypsy. Parade had a lot to live up to, and it certainly surpassed my expectations.

The book of the musical, written by Alfred Uhry (of Driving Miss Daisy fame) is inspired by the true story of Leo Frank, a pencil factory owner in Atlanta, Georgia, wrongly accused of murdering one of his employees, a little girl named Mary Phagan. The show is a very different one from your average musical. The script alone would almost seem serviceable enough for an interesting and thought-provoking play, but the addition of music (by Tony winner Jason Robert Brown) brings a sense of urgency and emotional turmoil no standard play could express. Perhaps because of this Parade is not an easy musical to stage.

I was lucky enough to attend Parade’s short-lived national tour when it played the Ordway in 2000. I found Harold Prince’s staging to be cold, distant and detached. It almost seemed like it wanted to be everywhere at once, without one clear, united vision.  Peter Rothstein’s direction for this production was more fluid and organized and suited the material much better. With the help of the more intimate atmosphere the characters were brought right up to the audience’s faces, and a much deeper connection was made to the story.

The principals for the show were top-rate. Dieter Bierbrauer brought a soft side to Leo sorely lacking in the actual dialogue of the book for the show. Leo’s part is mysteriously underwritten, but Bierbrauer did a fine job of making his plight memorable to the audience.

Ann Michaels was given a much more defined and well-written role in Leo’s wife Lucille. She grew from a “so plain, so prim” young Southern lady to a woman doing all she could to free her husband from his wrongful imprisonment. She shined in her big solos “You Don’t Know This Man” and “Do It Alone.” Her duet with Bierbrauer near the end of the show, “All the Wasted Time” was beautiful, and Rothstein’s direction pure, simple and haunting.

Parade is much more of an ensemble piece than one would expect, and the real highlights of the show come from secondary characters. Shawn Hamilton brought down the house with “That’s What He Said,” his character’s false testimony that Leo is guilty of the crime. It’s too bad the finale of his “Feel the Rain Fall” in the second act was cut short in this production. Caroline Innerbichler provided an innocent and poignant portrayal of Mary Phagan. The real standout, however, was Brian Skellenger’s “It Don’t Make Sense.” It’s arguably the best song in the score, and I was glad to see it restored to its full length for this production as opposed to the cuts made to it for the national tour. Skellenger’s rendition of the song is heartbreaking and chilling at the same time.

Several cuts were made to the show for this production, most of them for the better. The most noticeable of these is the absence of “Come Up to My Office,” a completely fantastical number for Leo in which the accusations made against him are shown to ring false. While a great song, it really doesn’t fit into the show cohesively and adds nothing to the story. It’s easily dispensed with and its absence was not felt. The song surrounding it in the original script, “The Factory Girls,” was given a more prominent focus in this production, and it proved to be a much more haunting choice for that moment in the show.

Parade is an instance of the musical theater burgeoning into a brilliant, important art form once again, and Minnesota Jewish Theatre and Theater Latte Da’s production does justice to this intricate, multi-layered show. This was definitely a Parade not to be missed.

Parade played through March 16th at the History Theatre in St. Paul.